The products that we are currently developing are becoming more and more complex. This complexity comes from the increasing demand for new software features to be delivered in less time. This is reaching a kind of absolute level beyond which we can’t no longer develop the software in a manageable, cost-effective way. To just keep adding more engineers to develop the software is no longer the solution. We are reaching the boundaries of what is possible.

By: Paul Zenden, systeem architect at Sioux in Eindhoven.

New products, new games, and new services, they are all getting more and more complex. Think of virtual/augmented reality games, wafer steppers, your smartphone, smart cars and internet of things in general. Why is that?

New products/services have to live up to our expectations. We are getting used to the current way of working and expect the next version of a product to do better, be faster, look nicer, have more pixels, be connected to the internet always and everywhere, etc. New features have to be added in less time to keep a competitive edge. Furthermore, we expect that applications can connect to and work with each other (e.g. use your smartphone to control the TV). This is all enforced by growth of the hardware capabilities.

However, there is a problem. In some domains, we are already reaching the point that the size of the software is becoming so big that it is almost impossible to maintain. It’s getting out of control. We can’t just keep adding more engineers to develop and maintain the software. F. Brooks already made this observation in 1995 in ‘The Mythical Man-Month’.

Functional programming concepts are already known and used since the 1950s, but they haven’t been applied very widely in the past decades. An important reason is that the available hardware lacked computing power and internal memory capacity what is needed to create industrial solutions. The object-oriented paradigm was more suited then. Now that the we have the availability of cheap and powerful multi-core, distributed systems and cheap memory, functional programming catches up.

Functional Programming in a nutshell

Functional programming works with ‘immutable state’, functions with no side-effects and the fact that complex functions can be constructed from simple functions. Functions are treated in the mathematical interpretation of functions (so called ‘pure’ functions). Functions only transform the input data, producing output data, without changing the input data. When functions have no side effects, it becomes much easier to realise parallel execution and gain a performance increase by executing the application on a multi-core target.

Immutable state means that once a variable is assigned some value, it can never be changed. By making changes to the state impossible multi-threaded solutions can be created, without many of the common issues like race conditions (when accessing shared memory) or dead-locks.

It almost seems impossible to write useful programs without the ability to change the value of variables. But it is, by combining pure functions, immutable variables and recursion. I challenge you to find out for yourself.

Reduce complexity, or not?

Functional programs are less complex in the sense that they, generally speaking, achieve the same functionalities as object-oriented programs with less,  and better quality code. (On Rosetta Code there are many examples of  the functional programming language solutions that are much smaller than the object-oriented counterparts.) This leads to a lower risk of bugs, due to immutable state and functions with no side effects. Functional programming also provides a powerful way to create distributed systems, due to the easy realisation of parallel execution.

Rise of the Languages and Frameworks

New, powerful frameworks are coming out that shield off difficult details and that make applying functional programming concepts more and more accessible. Examples are ELM for client side web applications and Phoenix, a server-side web framework. Another interesting new-comer is Elixir. Elixir is based on Erlang, a mature functional programming language and framework. Erlang is already in use in the telecom domain for more than 20 years. Elixir embeds the power of Erlang, but with a more accessible language derived to some extend from Ruby. Elixir also has impressive meta-programming features which allows the development of so called internal DSL’s. Another nice development is the use of Elixir in the embedded software domain.

Functional programming reduces code size, reduces the risk of bugs, enables easy parallelisation and thus increases the performance. It is one of the available means to help us manage the growing complexity in products and services. It is especially a technology to consider for concurrent, distributed applications.

If you want to read some more:
There are many books about functional programming, and also numerous online courses available on sites like Coursera, EDX and Plural Sight. I enjoyed this course very much: Erik Meijers 'Funtional Programming Fundamentals'. 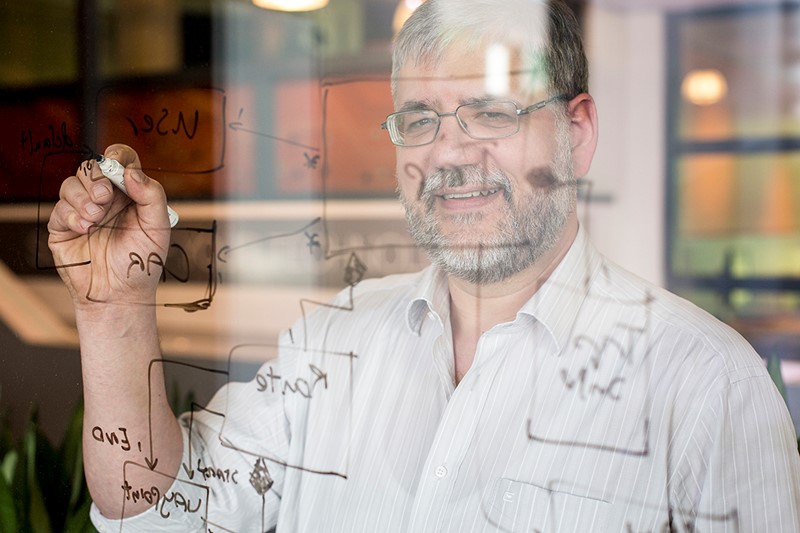