The customer wanted to bring an app for automating bird control to the market. Users should be able to configure, schedule and control the Aerolaser systems at the airport on their tablets. The app should also show system statuses, such as battery, power, data statistics and scheduling logs.

Sioux has developed the so-called Groundflex and Helipad apps to configure the Aerolaser systems through high-speed Bluetooth connection. Based on the chosen machine type, the app provides suitable layouts with predefined features and visualises the system’s real-time status. Sioux also created a web service and web viewer for collecting data from the Groundflex app on an Android tablet via the Internet connection. This provides administrators with a great overview of what is going on with their machine.

Bird Control was able to bring to market a new proposition that results in considerable savings for their end customers’ labour budgets. The app has also provided them with access to new markets such as oilrigs and factory sites, due to the automated bird control feature. This has resulted in revenue growth in existing and new markets alike. 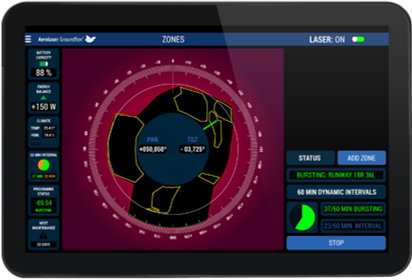 Bird Control Group (BCG) provides efficient, easy-to-use and animal-friendly solutions to keep birds at a safe distance from commercial activities. The BCG laser beams appeal to the survival instinct of the birds, causing them to fly away immediately.